After spending 2 smashing days in London, it was time to make our way to Paris. Before we left the Thistle City Barbican Hotel, we devoured another authentic British fry-up… and it took everything in our power to actually make our way to the train station (SO delicious)! As we were enjoying our meal, I noticed that some of the other hotel guests looked familiar, but I didn’t know why. One in particular had a Ferrari jacket that I thought was particularly fashionable, but I didn’t think much more of it… at least for a few hours.

Once we finished breakfast, we grabbed our bags and made our way to St. Pancras International train station to board the EuroStar train that would take us on the 2-hour journey from London, through the English Channel, to France. While riding the tube, we came across five of the most interesting, socially-conscious teenagers we’ve ever met. During the 15 minute tube ride, the seven of us discussed the American political climate (which seems to be a popular topic of conversation in England), how Georgia is a ‘police state’ and the pros & cons of legalizing marijuana. In all honesty, if we didn’t have to board our train, we were going to spent the next few hours hanging out with them!

Upon arriving at St. Pancras International train station, we went through customs and waited for our train. Something interesting we learned: once you walk through customs at the train station in London, you are “technically” in France (since they stamp your passport) and almost everything afterwards is posted in French. It was interesting, but a bit anti-climactic if you love getting your passport stamped. 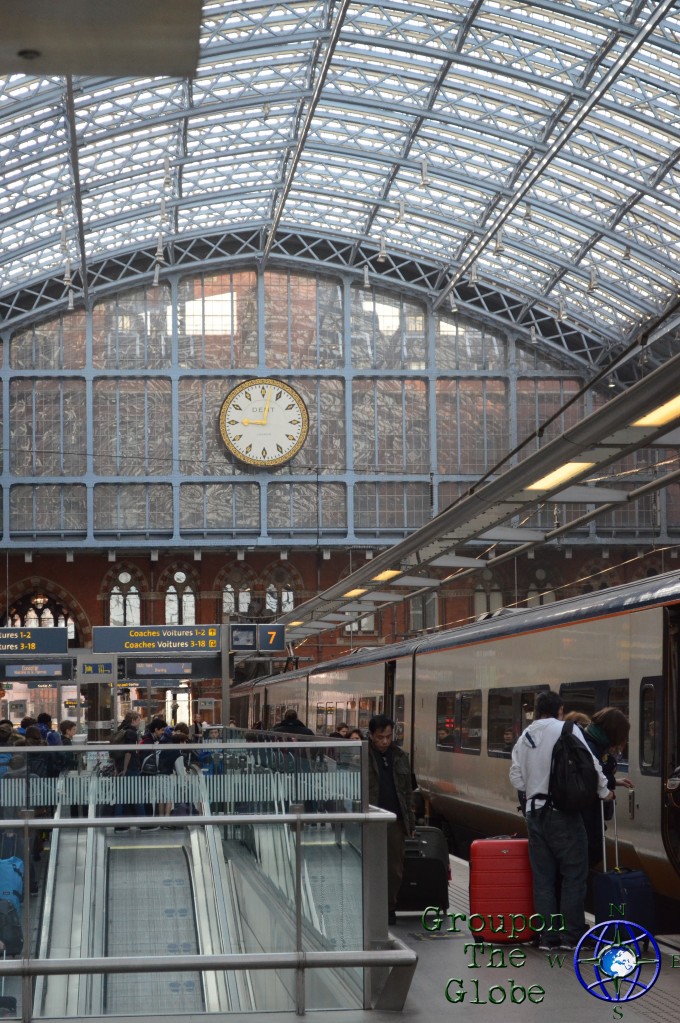 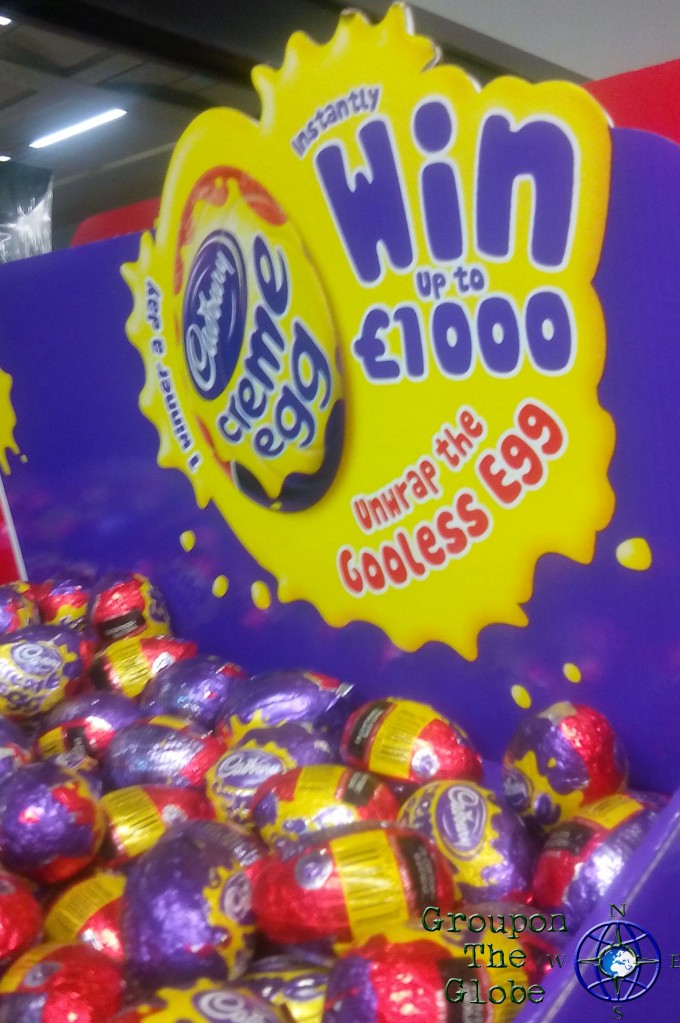 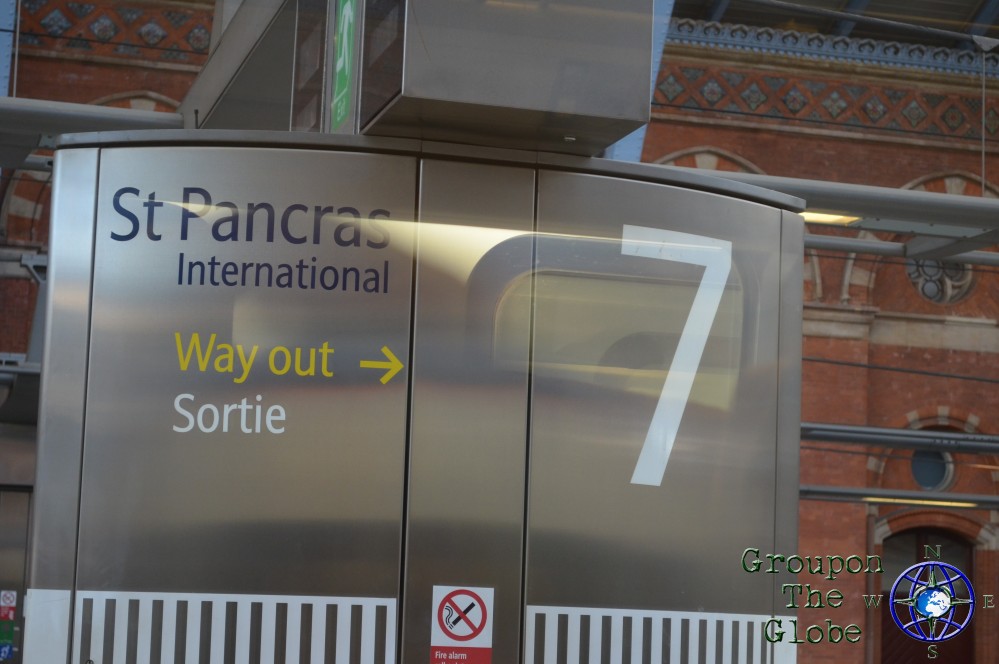 As we made our way to our seats, Joel & I were discussing how much fun we had thusfar on our trip… and that was when the true benefit of Groupon Getaways (and people eavesdropping) became clear. While sitting in our seats on the train, the couple sitting across the aisle said to us “Hey, did you guys buy your vacation on Groupon too?” and we told them we did! This was followed by the sisters sitting in front of us turning around and asking “Did you all say something about Groupon?!” and we told them we did! It was at that moment Joel stood us in the middle of the aisle and yelled to the train car “Who here purchased their trip on Groupon?”… and EVERYONE in the train car raised their hands… including the guy we saw at the hotel earlier in the Ferrari jacket! It was amazing! At that moment, all of us became “vacation buddies” and spent the next 4 days exploring France and Italy together. 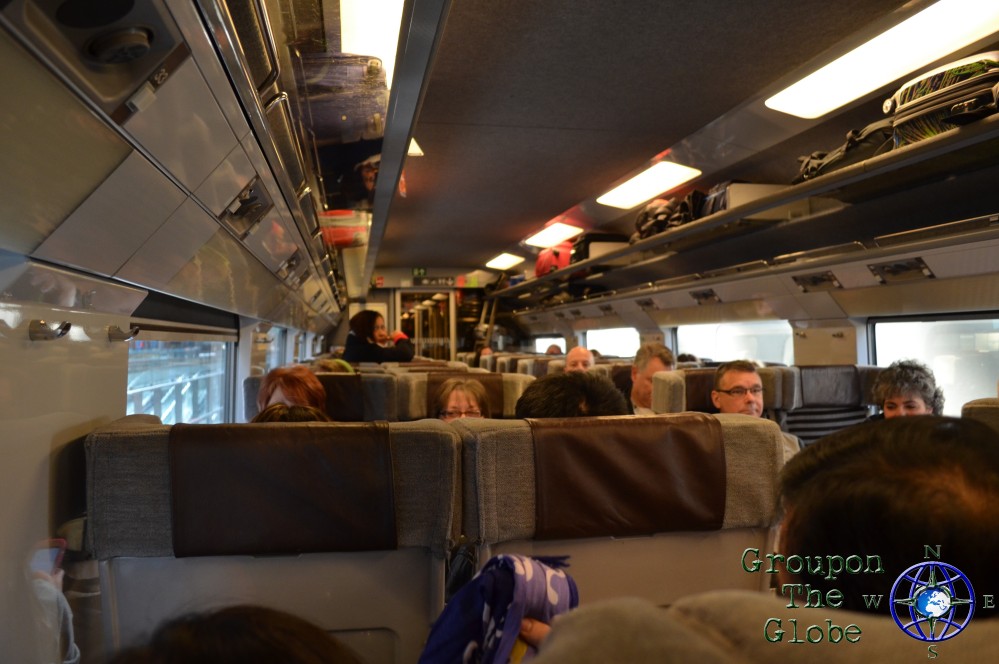 After the train started speeding through the English Channel toward France, we got to know our fellow travelers and learned a piece of fascinating, cost-saving information: all public transportation was free in Paris that weekend to offset pollution in the city! Originally, Paris was going to be my “sleep city” since I hadn’t had a full night’s rest since NYC, but once we learned that all buses and trains were free, Joel & I started compiling a list of places to visit! If you ever plan a trip to Paris, definitely check to see if it’s a free transportation weekend; they’ve actually resorted to this eco-friendly plan on several occasions since 2015.

Once we arrived in Paris, there was one thing from the US that we immediately noticed: the Kardashians; I guess some things are universal? Anyway, once we all realized that “nord” means “north” it was very easy to find our way through the train system. Originally, Joel and I were about to board a train on the “sud” (south) platform, but our new vacation buddies came running down the stairs to catch us before we were going in the totally wrong direction!

As we were all riding the train, I informed our fellow Groupon Getaway travelers that I looked up the directions to the hotel on the website Rome2Rio and that there were two routes available: one was shorter in distance while the other was flat/downhill. After weighing the pros and cons (and the weight of everyone’s luggage), the group decided to take the shorter, uphill route. Although the handle broke on one of the elderly passenger’s bags, everyone under the age of 40 took turns carrying her luggage (another benefit of vacation buddies).

After a 10 minute walk from the Laplace tube station to the Courtyard by Marriott Paris Arcueil, we all checked in at the front desk and set the clocks on our phones/cameras ahead one hour. When our large group walked in, the receptionist said in the sweetest broken English “Are you all Groupon tour group? We have been expecting you!” 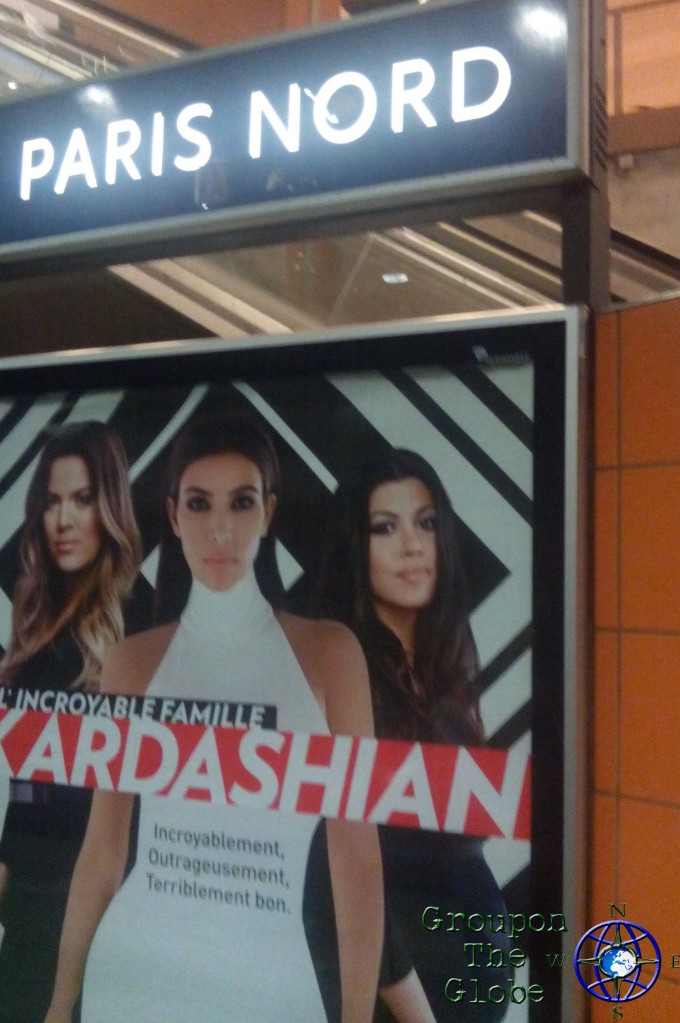 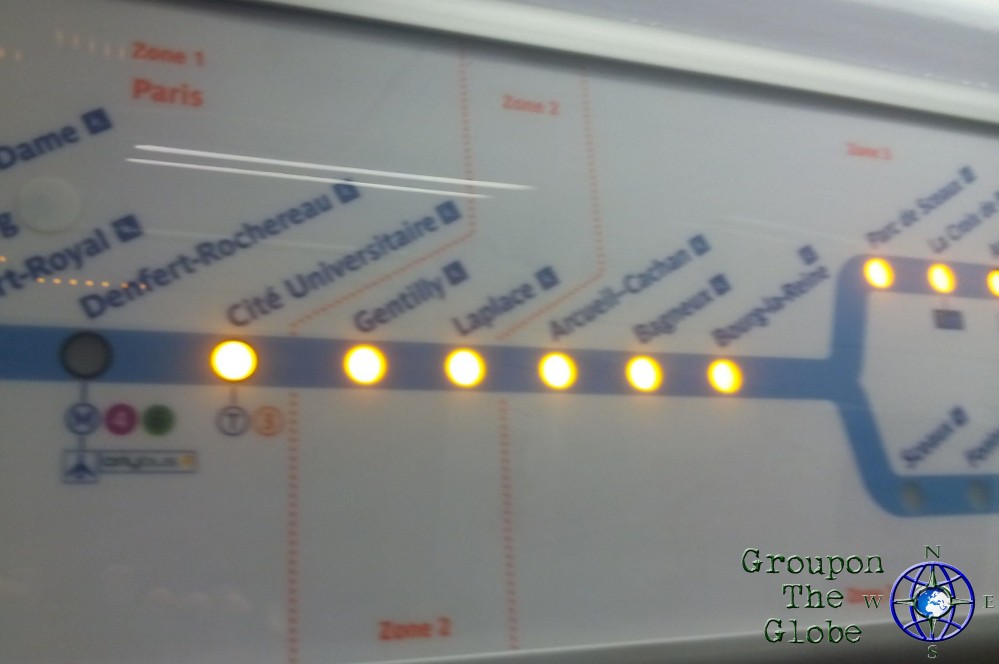 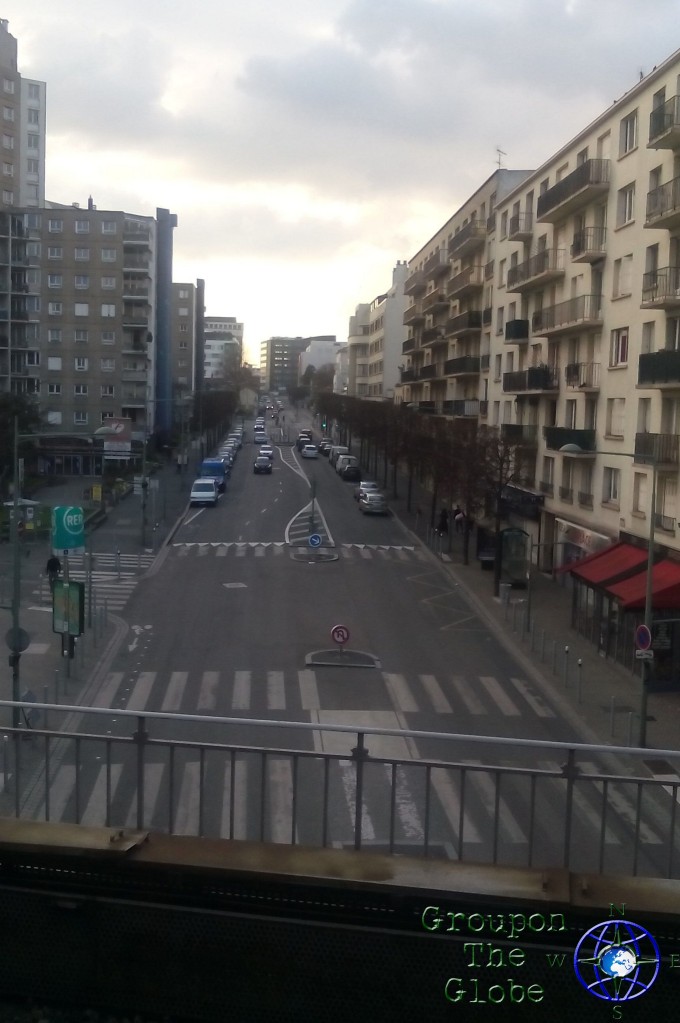 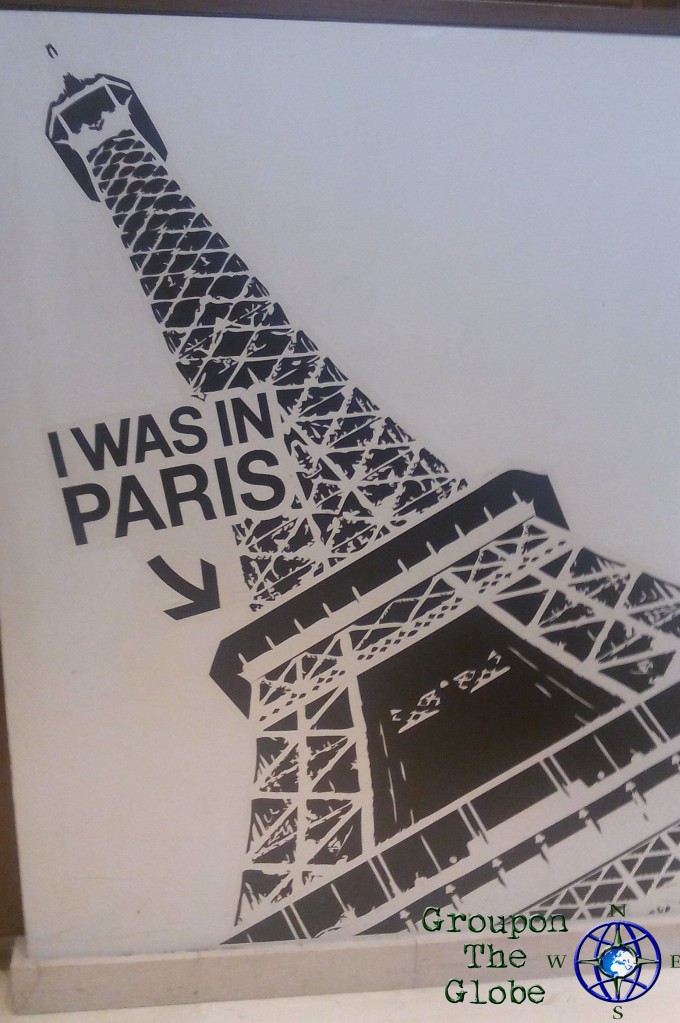 Once Joel & I found our way to our room and spent a few minutes catching our breath, we changed clothes (I had to debut my Paris-inspired wardrobe) and made our way toward our first destination: the Eiffel Tower! Since the transportation was free, we had to visit one of Paris’ most famous attractions!

As we exited the tube station near the Eiffel Tower and strolled along the Parisian sidewalks, Joel made sure to convert our pounds to francs & euros. He decided to do this at a currency exchange location instead of at the tube station to save money on fees. While he was having the money converted, I saw a poster with 3 famous words every Duolingo user will know: Le Chat Noir! If you are learning French via Duolingo, you have said, typed or translated “the black cat” more times than you can probably remember! Although this moment made me squeal, the next thing I saw took my breath away; there, in all her glory was the Eiffel Tower! 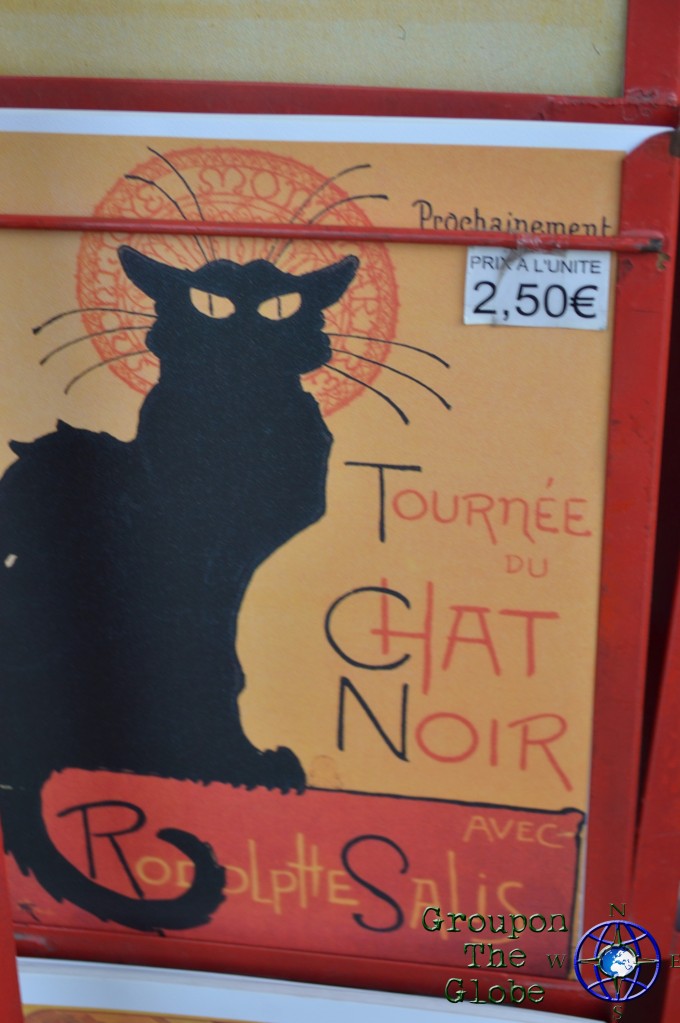 The closer we walked to the Eiffel Tower, the more our excitement rose! Finally, after a 10 minute walk past gated apartment buildings and a quaint café (that would come in handy a few hours later), we arrived at our destination! 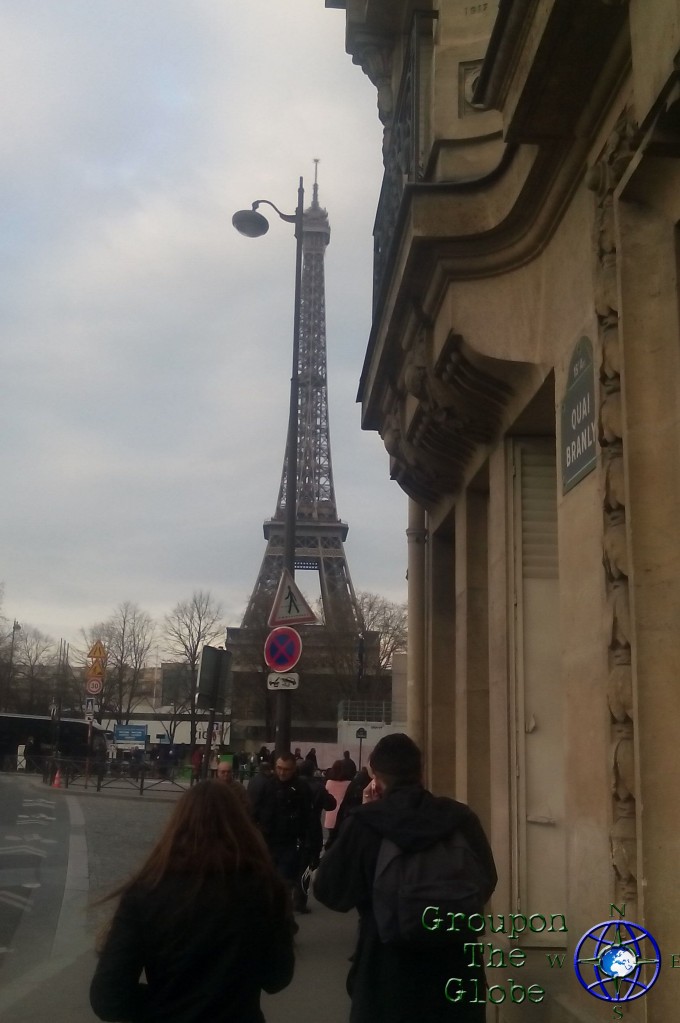 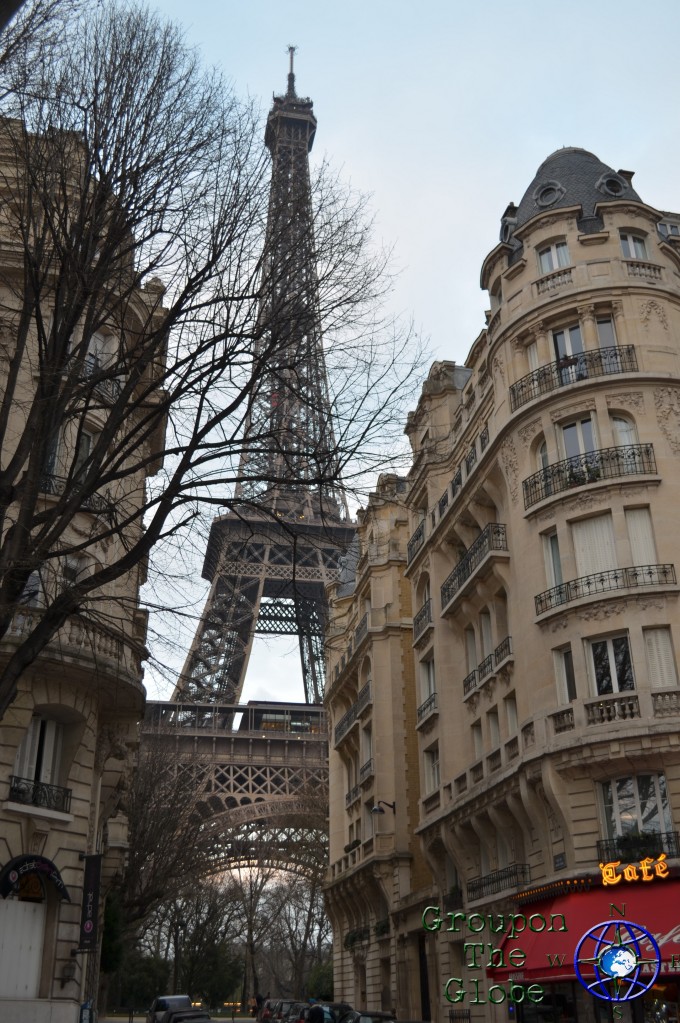 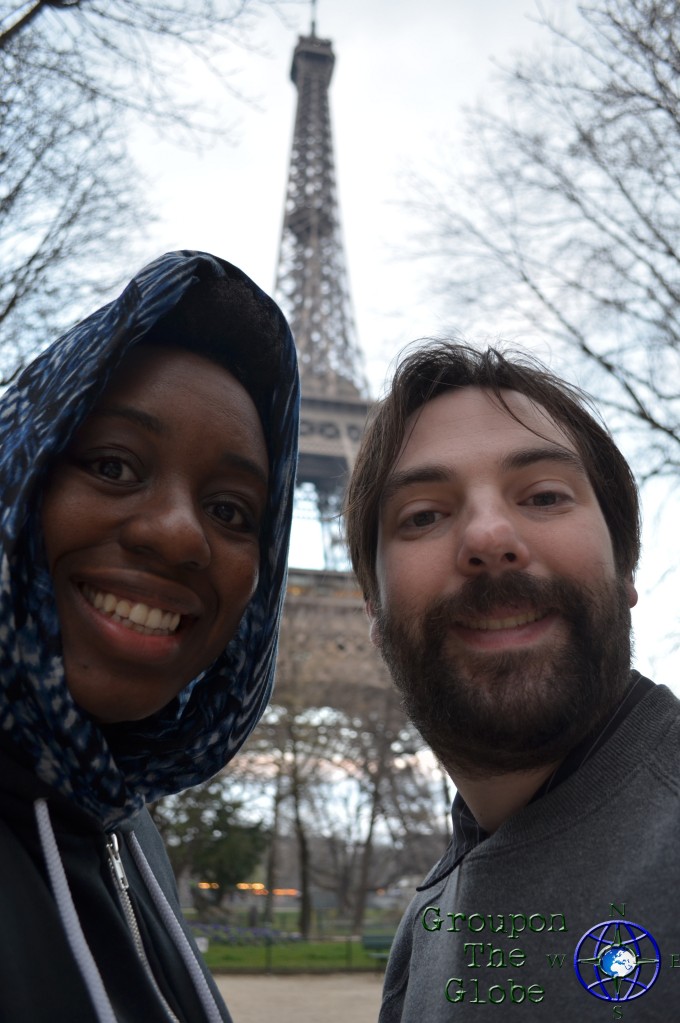 Once we arrived, Joel did the most touristy thing he would do on this trip: he ordered French fries at the concession stand below the Eiffel Tower (I ordered an apple strudel). After waiting in line for at least in hour -and attempting to have a conversation with some locals whom assumed we were French and made fun of Joel’s snack choice – we climbed several flights of stairs, rode a pulley-based elevator and finally reached the top of the Eiffel Tower. The view was amazing! While at the top (which you can purchase different tickets to visit different levels), we could see several Paris landmarks: the Seine River, Notre Dame and The Lourve Museum to name a few. There was also an apartment atop the tower where Gustave Eiffel (the tower’s designer) lived, signs that showed how far away other international cities were located & how other world landmarks compare in height, as well as a restaurant. One of the surprises we didn’t expect was how the tower has a light show at the top of every hour! A collective “Oooh!” could be heard from every visitor. Another surprising thing we noticed were the constant announcements warning visitors that there “are pickpocketers in the tower” and they can easily steal your possessions. Luckily, we didn’t fall victim to any theft. 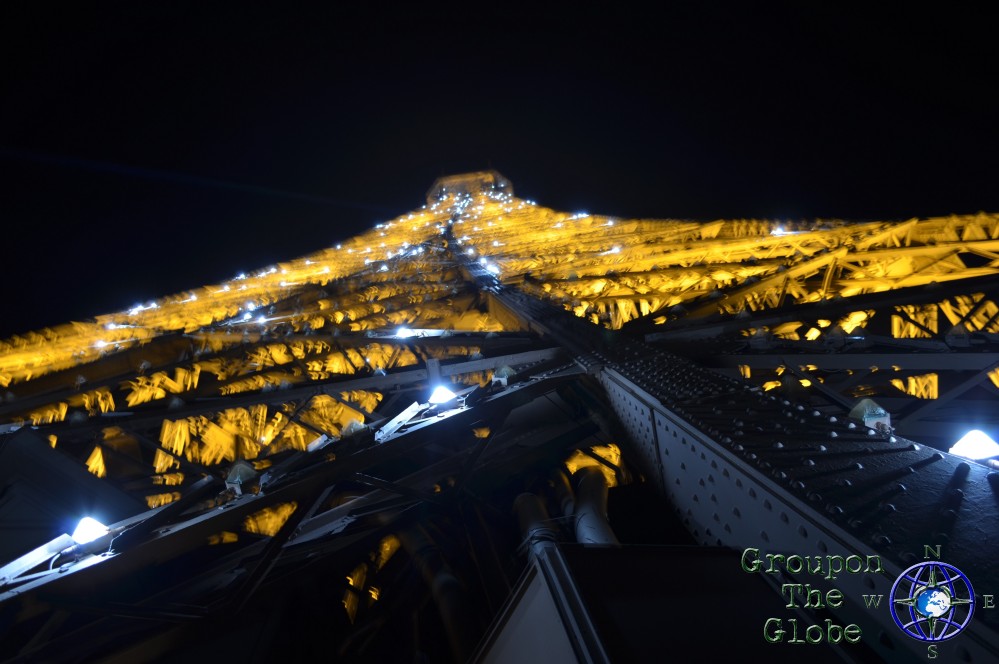 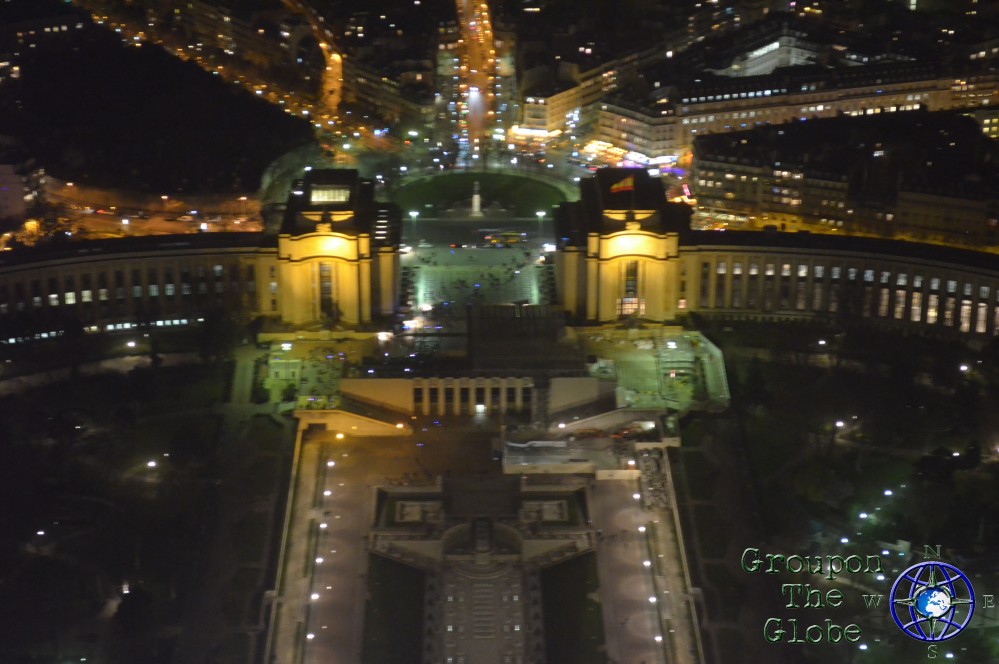 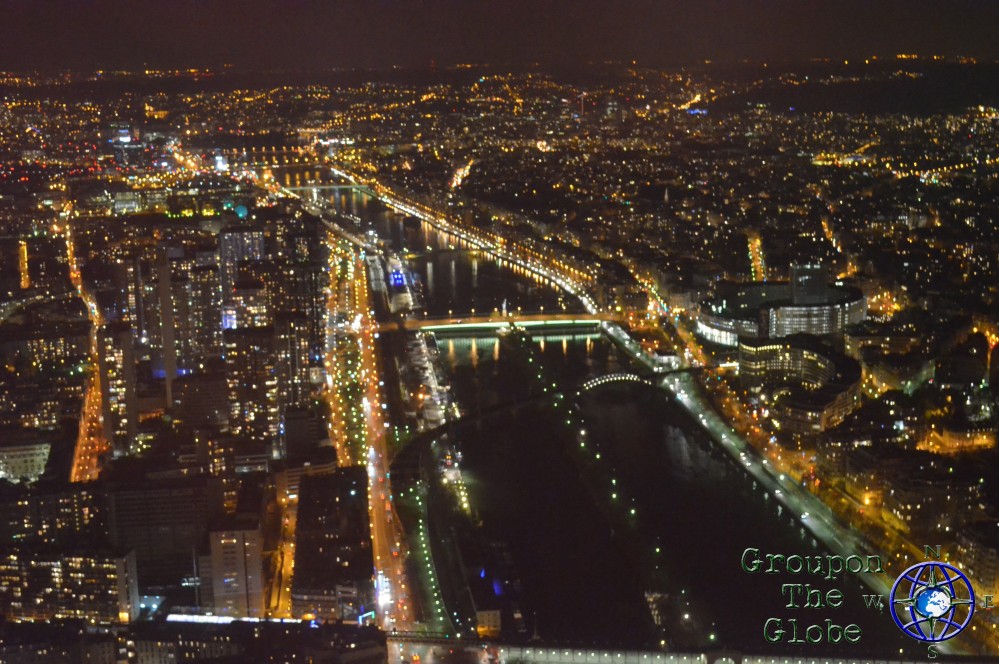 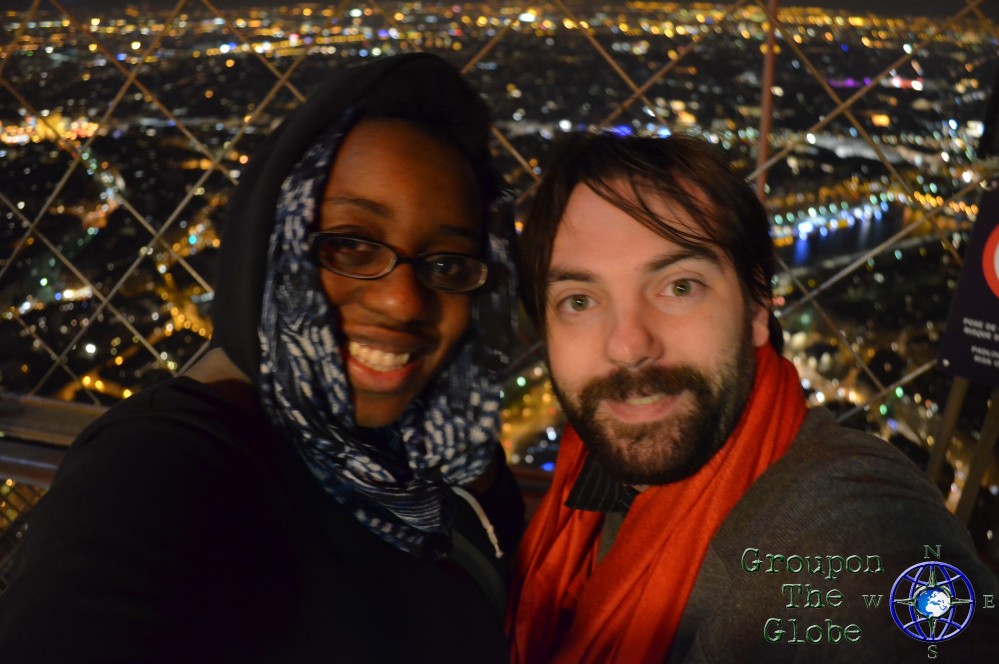 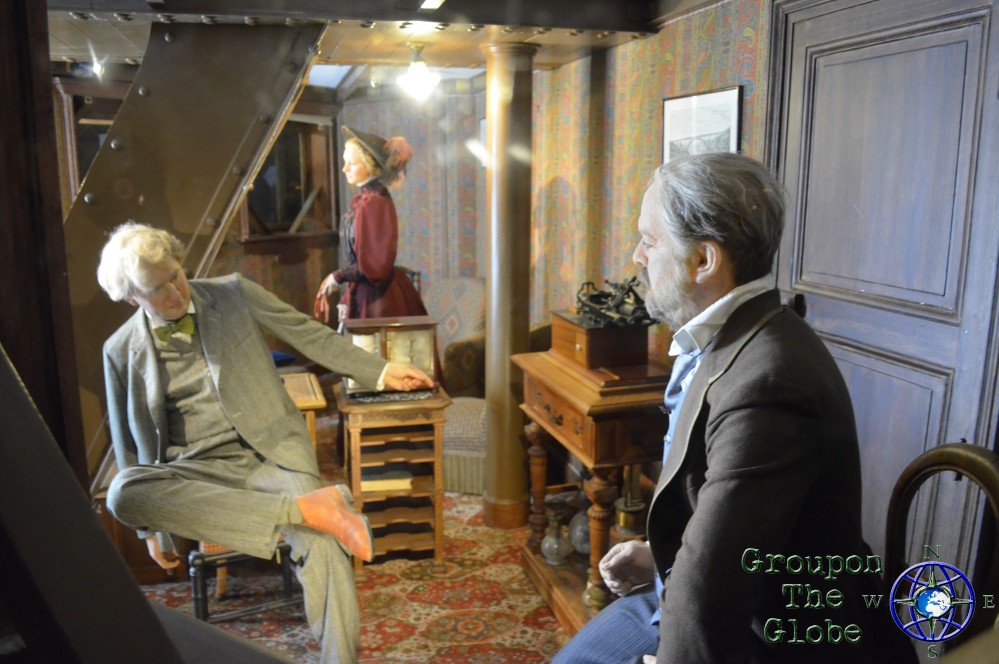 After we spent a few hours enjoying the view and learning about this feat of French architecture, we started to make our way back down the tower… and somehow got separated. Joel swears he was right behind me on the elevator, but I know I saw him go down the stairs. Either way, we got separated and it took us about 30 minutes to find each other (but it felt like hours). As I waited at the bottom of the tower for him, he was actually at the information/ticket booth asking if they could do an all call; however, they didn’t speak English, so they couldn’t help/understand him. Meanwhile, I did my best angry face to keep all potential pickpocketers at bay. One thing we both learned: all four legs of the Eiffel tower look identical, so it was easy to think we were at the same side. Finally, we both found each other (by the grace of God) and Joel was on the verge of tears. He said to me “I was afraid I had lost you; I don’t know what I would have done!” I was about to yell at him when he then said “If I didn’t find you in the next hour, I was going to wait for you all night at that café we passed.” which made me smile ear to ear! I actually planned on looking for him at the same café – Café Castel – within the hour if I couldn’t find him! We know each other so well!

Once we hugged and came up with a contention plan in case we got separated again, we went to our impromptu meeting spot: Café Castel. Seated in the shadow of the Eiffel Tower, it was the quintessential French bistro. For dinner, we wanted to be as authentic as possible, so we ordered escargot (snails), Sloe Gin Fizz (my parents’ favorite cocktail), pâté and macarons. It was very rich and so yummy! Although the portion sizes weren’t massive, our appetites were very satisfied! 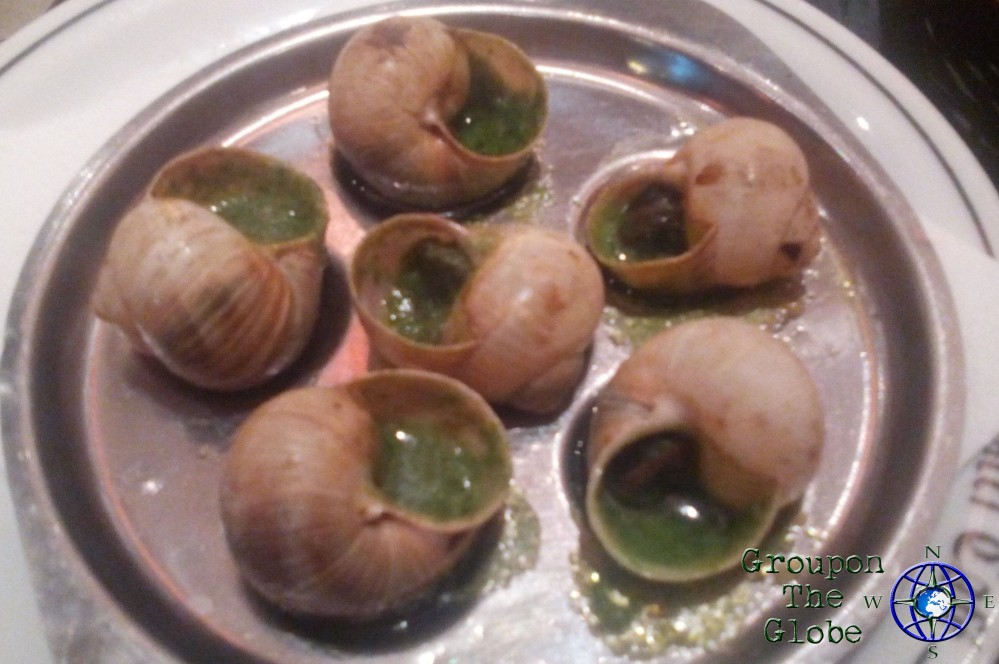 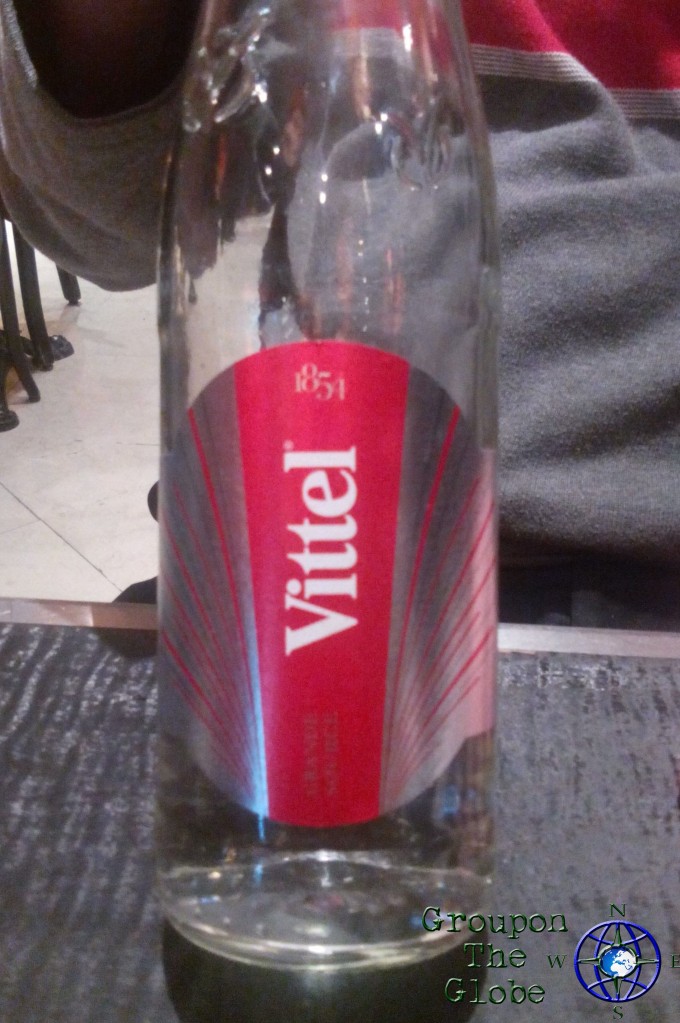 After dinner, it was finally time to make our way back to the tube and rest up for the next day’s big adventure: Palace of Versailles!